This rider has 2 old and 3 new Jawa & Yezdi motorcycles

Legendary two-wheeler brand Jawa which is now owned by Classic Legends was re-introduced in Indian market few years ago. Jawa introduced three models and they are all currently available for sale in the market. This year, Classic Legends brought back the iconic Yezdi brand to India as well. Both Yezdi and Jawa currently have three models each in their portfolio. While Jawa focused on retro looking modern motorcycles, Yezdi launched three different motorcycles to cater needs of the customer. Here we have a video about an owner who owns 3 new and 2 old Yezdi & Jawa motorcycles in his garage.

The video has been shared by Anupam Thareja, c0-founder of Classic Legends which now owns Jawa and Yezdi. The video is about Srinivas from Tamil Nadu, who owns several Classic Jawa and Yezdi motorcycles. He also formed a group for Yezdi owners. In this video, he talks about a Yezdi CL motorcycle which his father owned once. He was always fascinated by the way it looks and the roaring exhaust note from the twin silencers. It was one of the reason why he decided to form a group for Yezdi and Jawa motorcycle owners.

He wanted a common space for Yezdi owners where they can talk about their ownership experience with each other. The group when started had 5 members and now it has almost 550 members. He even went to the launch of Jawa motorcycles in Mumbai and the motorcycle that caught his attention was the Perak. Classic Legends only launched the Perak after an year they launched the Jawa and Jawa 42 in the market. Srinivas told them that he is ready to wait for an year and half but he needs the fist Perak in Tamil Nadu. 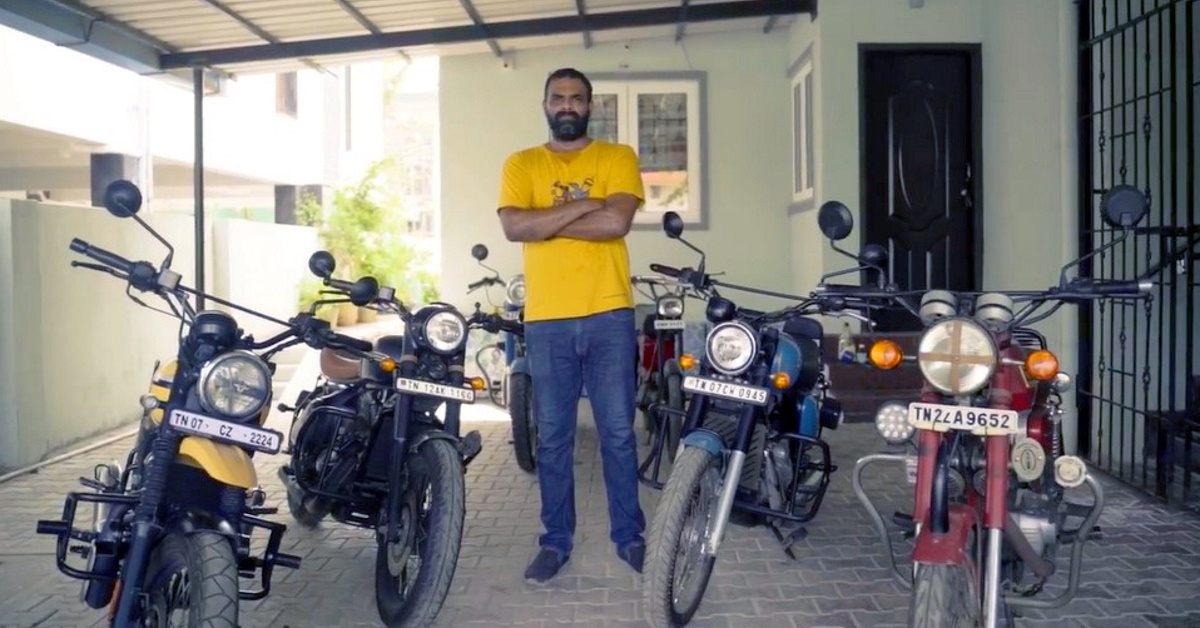 He did manage to get the Perak when it was officially launched. It is the cheapest bobber style motorcycle one can buy in India and it was looking different from the other Jawa offerings too. He really liked the styling and character of the motorcycle. He also owns a Yezdi Scrambler. Srinivas can be heard saying in the video that he feels like the Yezdi does not look the same as before. While Jawa is trying to retain the retro looks while offering modern day features, Yezdi is an all-new bike but it still has the typical solid built feel to it.  As he was already managing the Jawa owners group, he had other Yezdi motorcycles in his garage as well.

He currently has a Blue Yezdi Classic and Yezdi Colt which is one of the oldest motorcycle in his garage. Other than these two motorcycles, Srinivas also owns Jawa Perak, Jawa 42 and a Yezdi Scrambler motorcycle. Anupam Thareja has posted this video on his Facebook page saying Srinivas and his Jawa Yezdi Love Story. In this post, Anupam said, “When I hear Srinivas talk about his bonds with #JawaYezdi, his passion for the motorcycles, I’m reminded why I’m in this business… it’s for people like him. Once you feel that connect, it’s in your blood – I know that feeling all too well!” Jawa currently has Jawa Jawa or Jawa Classic, Jawa 42 and Jawa Perak in the portfolio. Yezdi motorcycles offer Roadster, Scrambler and Adventure motorcycle in their portfolio.

Legendary two-wheeler brand Jawa which is now owned by Classic Legends was re-introduced in Indian market few years ago. Jawa introduced three models and they are all currently available for sale in the market. This year, Classic Legends brought back the iconic Yezdi brand to India as well. Both Yezdi and Jawa currently have three…