Many roads in India, especially in the Western Ghats pass through forest and incidents of wildlife being spotted on the road have increased lately. We have seen several videos and images of people spotting elephants on roads. Recently, another incident happened where cops completely brought the traffic on a highway to a stop after they spotted a tiger. The traffic on the road was only resumed after the tiger crossed the road. Video of the incident has gone viral on the internet and Parveen Kaswan, Indian Forest Service officer shared the video as well.

The video posted on Twitter does not have the audio. Which makes it slightly difficult to understand the location. Parveen Kaswan, IFS wrote on his post, “Green signal only for tiger. These beautiful people. Unknown location.” From the video, it looks like, the tiger was spotted somewhere in Maharashtra. The reason why we say this is because the video shows a motorcycle that is registered in Maharashtra. The exact location in Maharashtra is still unknown. One of the comment under the video mentions that the video is from National Highway 353D between Brahmapuri and Nagbhir in Maharashtra. The traffic was stopped from both the ends. It looks like the officers were asking people to not honk or turn their vehicles off to not stress the animal.

After a few seconds, the tiger decides to show up. He or she slowly comes out of the cover and slowly walks towards the road. It looks at the people and vehicles that were parked on both the ends and slowly walks towards the forest on the other side of the road. The video of the tiger crossing the road has already become viral on the internet. According to reports, the tiger was trying to cross the highway and that is when the cops spotted it. They soon brought the traffic to a stop and gave tiger the opportunity to cross the road without any issues.

Lately, we have seen several incidents of road users encountering wild animals. We have been seeing several reports of elephants being spotted on roads and highways that pass through forest. Elephants have even attacked couple of vehicles but fortunately, none of the people were hurt. A biker from Kerala also escaped miraculously from an elephant. He was trapped in front of an elephant while he was going back to his house from work. Thankfully, the elephant did not hurt the biker and just touched the motorcycle and left the spot. 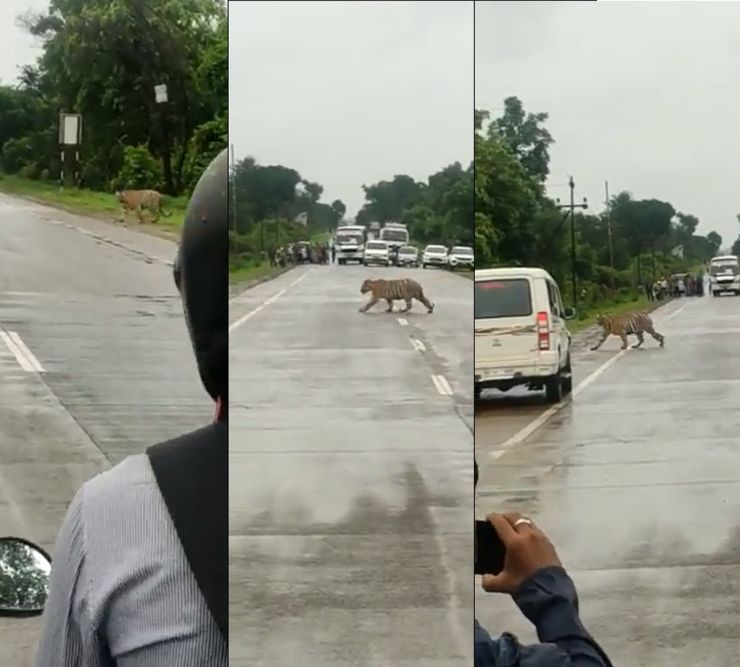 If you are person who usually travels through such roads where the chances of spotting animals like elephants and tigers are high, then there are few things that should be kept in mind. If you come across a wild animal, never make loud noises or sudden movements. If you are travelling at night, then turn the car or bike off. Don’t forget to turn the lights off as well.  If the anima has blocked the way, then bring the vehicle to a stop and be still. Do not panic in such situation as it would trigger the animal and might attack you. The roads are usually built through forests, which means we are in their territory so respect that and don’t do anything to make them feel threatened. If you travelling through forest, never offer food to wild animals as it would develop a habit in them and might attack other road users for food.

Many roads in India, especially in the Western Ghats pass through forest and incidents of wildlife being spotted on the road have increased lately. We have seen several videos and images of people spotting elephants on roads. Recently, another incident happened where cops completely brought the traffic on a highway to a stop after they…