Riding or driving on Indian roads is always a challenging task. We have seen several videos of rash driving that lead to accidents on our roads. Finding a cow, dog or even a person in the middle of the road is not very uncommon. Here we have a video where a Triumph Street Triple rider nearly misses a Tata Harrier on a turn. The whole incident was actually captured in the helmet camera of a rider who was following the Triumph Street Triple rider. This is how the incident happened.

The video has been uploaded by Lifemystic369 on their YouTube channel. In this video, the person who is recording the video is behind the Triumph Street Triple rider. It looks like there were three bikes in the group and they were travelling through a hill section. The roads were very narrow and there were vehicles coming from the opposite direction as well. The bikers were carrying good speed as they found an empty stretch. The Triumph rider tried to corner the motorcycle in one of the turns and that was a bad decision.

The moment he went to the opposite side of the lane and as he started turning, he spotted a Tata Harrier SUV on the road. The SUV was coming towards his bike and he suddenly applied brakes and slowed down. The car driver also spotted the biker and he had slowed down. The good thing about both biker and the car driver was that they were not driving at insane speed in the turns. As the biker had already prepared to take the turn, he was shocked to see a car coming from the opposite side and after he stopped, he lost control and the bike fell down. 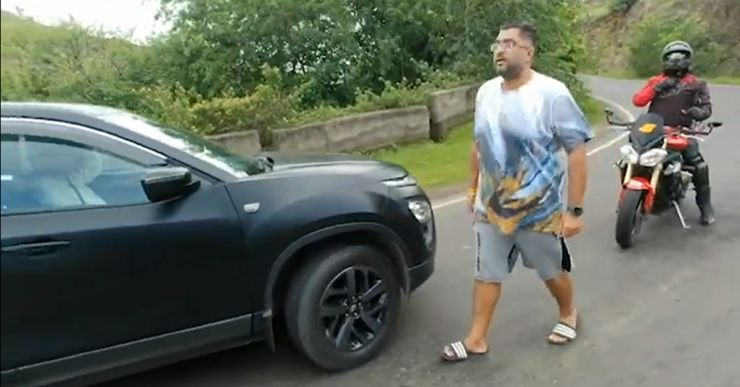 As the car driver saw the bike fall down, he got confused and he came out of the Harrier to check if he actually hit the biker or not. The car driver then helped the biker lift the Triumph Street Triple motorcycle while the rider behind him, who was on Royal Enfield Himalayan stopped on the side of the road. It all happened in a very short amount of time. By the time Himalayan had stopped, the Harrier driver had already started helping the rider to pick the motorcycle up. The person recording the video rushed to the other biker and engaged side stand to ensure that the motorcycle does not fall to the other side.

In this case, the Triumph rider was at fault. He was riding on a public road and that too a very narrow one. We admit that such curves on the road can be tempting for the bikers but, that does not mean you should do it. The rider was completely on the opposite lane and if the Harrier driver had not spotted him, then things might have got worse. By doing such stunts, he was not only risking his life but also the life of other people. Always ride on your lane and if you want to do such stunts, it is always a good option to take your bike to a race track.

Riding or driving on Indian roads is always a challenging task. We have seen several videos of rash driving that lead to accidents on our roads. Finding a cow, dog or even a person in the middle of the road is not very uncommon. Here we have a video where a Triumph Street Triple rider…