Toyota Fortuner is without any doubt, the best selling SUV in its segment. The Fortuner has been ruling this segment for years and as of now, there is no real competition to it. It is popular among buyers for its reliability, rugged looks and low cost of maintenance. There are many first generation Fortuner owners in India, who are still using the SUV without any major issues to the engine. For those who are bored with the looks, there are several aftermarket modification options available for Fortuner. Here we have one such video where a type 2 Toyota Fortuner has been neatly modified to look like type 3.

The video has been uploaded by Autorounders on their YouTube channel. In this video, a type 2 Fortuner is neatly converted to look like a type 3 Fortuner from the front while rest of the car retains the type 2 look. Video shows all the changes that have been  done to the SUV. The type 2 Fortuner had several dents on it and some of the panels were damaged too. As part of the conversion, the front bumper, bonnet, headlamps, grille, fenders were all removed. They were all replaced with aftermarket type 3 parts. The front grille, headlamps, bumper, bonnet and the fenders were all replaced to achieve the type 3 look at the front.

The minor dents on rest of the body panels were all repaired and a coat of putty was applied on the car. The excess putty was removing using a sander. The interior on this SUV was also showing its age. The seat covers had started to tear apart and the cushioning in the seat had also gone bad. All the plastic panels in the cabin were removed and were repainted in black shade. The seat covers were also replaced. It now comes with a custom made white and black dual-tone seat covers. Other attraction in the cabin include faux wooden inserts on steering wheel, door pads and the center console. 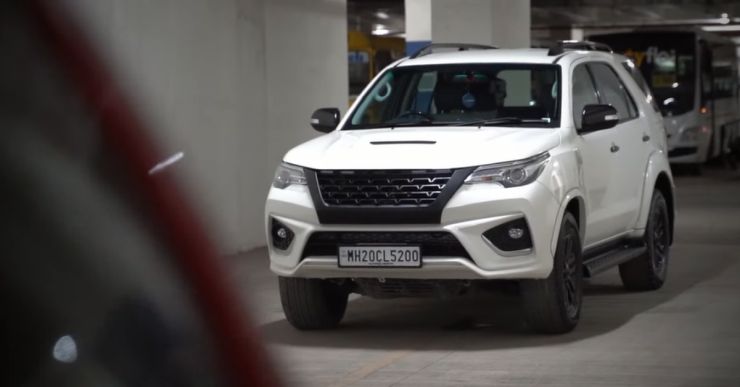 The company fitted infotainment system has been replaced with an aftermarket touchscreen infotainment system. The roof liner on this Toyota Fortuner is redone in blacka. It gets Rolls Royce-like galaxy star light roof feature in it. The colour of the light and the intensity can be controlled using a mobile application. Along with the galaxy star light roof, the door and the dashboard of the SUV gets ambient lights in it. This can also be controlled. One the repair work on the exterior of the SUV was done, the car taken to the paint booth and here the whole car was repainted in the Pearl White shade which the SUV came with.

The rear profile of this Fortuner still looks like the type 2 Fortuner while the front gets the current generation Fortuner look. The rear gets aftermarket LED tail lamps and there is a illuminated chrome applique on the tail gate with Fortuner branding on it. The alloy wheels remain the same but, they are now painted black for a sportier look. Overall, the modified Toyota Fortuner SUV looks very neat gives the SUV a fresh look.

Toyota Fortuner is without any doubt, the best selling SUV in its segment. The Fortuner has been ruling this segment for years and as of now, there is no real competition to it. It is popular among buyers for its reliability, rugged looks and low cost of maintenance. There are many first generation Fortuner owners…