According to the sources, the new Royal Enfield Hunter 350 will be available in three variants – base-spec ‘Retro’, mid-spec ‘Metro’ and top-spec ‘Retro Rebel’. Starting with the Retro variant, the Hunter 350 in this variant will get bare-basic essentials, like a braking combination of 300mm disc at the front and 153mm drum at the rear, which will be assisted with a single-channel ABS.

Royal Enfield Hunter to be available in three variants 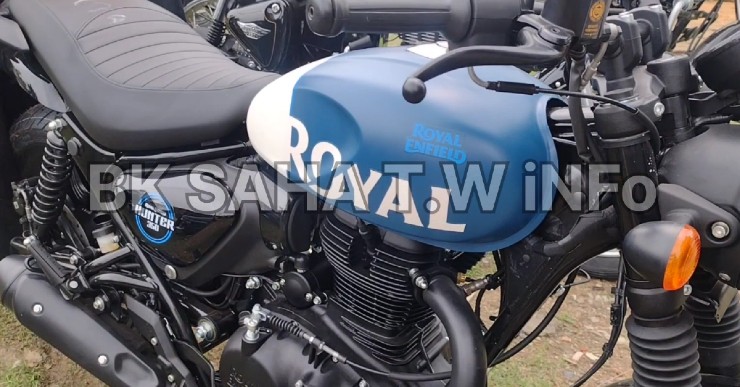 The Royal Enfield Hunter 350 Retro variant will also get 17-inch spoke wheels wrapped with a 100-section tyre at the front and a 120-section tyre at the rear. The other highlights of this variant include a halogen tail lamp, oval turn indicators and a basic all-analogue instrument console. Weighing 177 kg, this variant will miss out on a centre stand and will be offered in two colour options – Factory Black and Factory Silver.

Now comes the mid-spec Metro variant, which will come with a few improvements over the Retro variant, like a 270mm disc at the rear, a dual-channel ABS, and 17-inch alloy wheels wrapped with a 110-section front tyre and 140-section rear tyre. It will also get an LED tail lamp, rounded indicators and a part-digital instrument console from the Scram 411. Weighing 181 kg, the Royal Enfield Hunter 350 Metro variant will be offered in single-tone colour options like Dapper White, Dapper Ash and Dapper Grey.

The top-spec Royal Enfield Hunter 350 Metro Rebel will retain the entire specifications and features list of the mid-spec Metro variant. However, it will get dual-tone colour options, and not single-tone ones of the Metro variant. The colour options are Rebel Black, Rebel Red and Rebel Blue, the last colour of which is expected to be the dual-tone model spied as mentioned above. The erstwhile spy pictures also revealed the Tripper navigation unit fitted beside the instrument console, which indicates that the Hunter 350 will be offered with the Tripper navigation unit as an option, just like in the Meteor 350.

Previous Post
2022 Suzuki Swift spied – What we can figure out so far
August 4, 2022
Next Post
Chief Designer Pratap Bose shares early sketches of the SUV on Twitter
August 4, 2022