Kia Sonet is one of the most popular vehicle in the sub-4 meter SUV segment. It competes with cars like Hyundai Venue, Maruti Brezza, Tata Nexon, Mahindra XUV300 in the segment. Kia launched Sonet couple of years ago and it immediately became popular among buyers like other products from the manufacturer. Kia Sonet gets a bold looking design and feature loaded cabin. Although, Kia Sonet and other cars in the segment are called an SUV, they are meant for hardcore off-roading. They are front wheel drive SUVs that can handle broken roads, uneven surfaces and have ample ground clearance. Here we have a video where a Kia Sonet owner takes the SUV off-road to test its capabilities.

The video has been uploaded by Vicky Rao on their YouTube channel. In this video vlogger along with his friend drive the SUV through broken roads of village to see if it can handle bad road and whether it has ample ground clearance or not. The way through which vlogger was driving the car was not properly paved. He was driving on mud roads that were uneven. The SUV was handling the roads without any problems. It managed to do that without hitting the bottom at any point. After driving the SUV through the broken and uneven mud roads, they finally reach a point where there was a steep climb to join a highway that was currently under construction.

The vlogger asked one of his friend to get out and check if the car can clear the section without getting the bottom hit and also record the video. The track was normally used by tractors and the section has several areas where the track was deep. The vlogger drove the SUV smoothly up the steep slope and the Kia Sonet did not hit the bottom even once. Once he reached the top and joined highway, vlogger became slightly more confident about the performance. He then started looking for a bit more difficult stretch to test the ability. 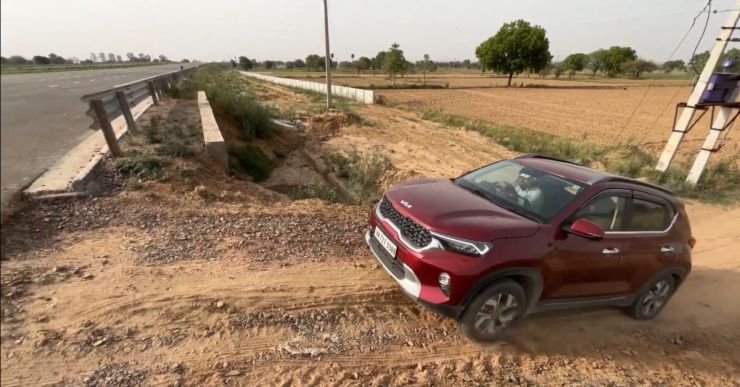 He found another track that goes down the highway and tried driving the Sonet down through it. Once he got down, he tried driving the SUV up . In comparison to the first slope, this one had loose rocks in it which made things a bit more challenging. The Kia Sonet is a front wheel drive SUV which is not ideal for off-roading. As the Sonet started climbing, the front wheels started loosing traction at places. There was fair amount of wheelspin and the vlogger even stalled the vehicle couple of times.

The Kia Sonet managed to come up without any major issues and bottom of the car did not hit the ground. Kia Sonet is a sub-4 meter compact SUV which is available with three different engine options. The car has a 1.2 litre naturally aspirated petrol engine that comes with a manual gearbox option. The diesel version uses a 1.5 litre turbocharged diesel engine and it comes with manual and a 6-speed automatic transmission. The 1.0 litre turbo petrol engine gets manual, 6-speed iMT and 7-speed DCT gearbox.

Kia Sonet is one of the most popular vehicle in the sub-4 meter SUV segment. It competes with cars like Hyundai Venue, Maruti Brezza, Tata Nexon, Mahindra XUV300 in the segment. Kia launched Sonet couple of years ago and it immediately became popular among buyers like other products from the manufacturer. Kia Sonet gets a…