Toyota Urban Cruiser Hyryder will be soon launched in our market. This is Toyota’s first ever mid size SUV in Indian market and it would compete with cars like Hyundai Creta, Kia Seltos, Skoda Kushaq and Volkswagen Taigun in the segment. It is jointly developed by Toyota and Suzuki and Maruti’s version of Hyryder which is known as Grand Vitara will be launched in the market later this month. Both Hyryder and Grand Vitara offer a strong hybrid system which makes them highly fuel efficient when compared to the competition. Here we have a video that test the real world fuel efficiency of Toyota Hyryder.

The video has been uploaded by Power On Wheel on their YouTube channel. In this video, the anchor tests the real world fuel economy of the strong hybrid version of the Toyota Urban Cruiser Hyryder. To test the fuel economy, the anchor takes the car to a petrol pump and fills fuel to the brim. After filling, he starts driving the car through city, highways and he even encountered traffic at some places.

Video mentions that the maximum speed at which the car was driven during the test was 80 kmph only. He was driving the car with a light right foot to show how fuel efficient can the Hyryder actually be. He even opened the window in the touchscreen infotainment system that was showing the flow of energy. When the anchor was driving at slow speeds or he was taking the foot off the accelerator, the electric motor was drawing power from the batteries to keep the car moving. This was happening seamlessly just like what we experienced in the Honda City hybrid. 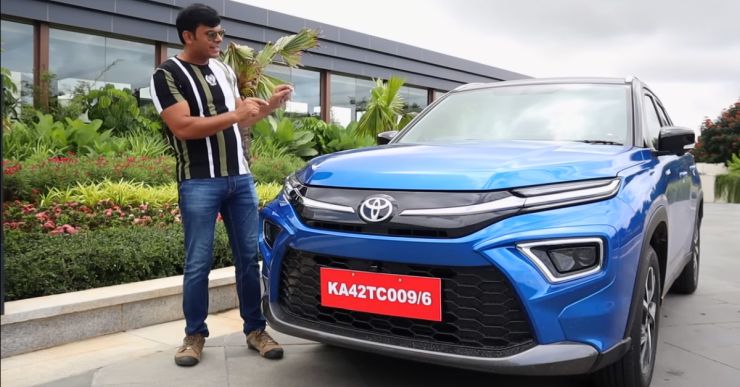 Once you start accelerating, the car starts using the regular engine while the generator recharges the battery pack. The anchor had reset the trip meter before starting the fuel economy run and he drove the car for some distance. The claimed fuel economy of the Toyota Hyryder strong hybrid version is 27.97 kmpl. He wanted to see if the Hyryder which is a mid size SUV can actually achieve this figure in real world conditions. He drives the car in city traffic conditions and after driving the car for almost 30 km, he decides to drive back to the same petrol pump from where he had filled the fuel initially.

When he reached the petrol station, the car had covered 33.8 km. He starts to refill petrol in the car and surprisingly, the Urban Cruiser Hyryder took in only 1.06 litre of petrol. Which means, the car returned a fuel efficiency figure of 31.8 kilometre to a litre. This is extremely good for a car of this size. The anchor mentions that it all comes to the driving style. If you drive the Hyryder aggressively, then the petrol engine will not return the fuel efficiency that you are looking for. Just like the electric cars, there is a particular style for driving hybrid cars and if you can get used to it, then you will be happy with the fuel economy figures.

Toyota Urban Cruiser Hyryder will be soon launched in our market. This is Toyota’s first ever mid size SUV in Indian market and it would compete with cars like Hyundai Creta, Kia Seltos, Skoda Kushaq and Volkswagen Taigun in the segment. It is jointly developed by Toyota and Suzuki and Maruti’s version of Hyryder which…