Villagers force road construction workers and officials at gunpoint and make them build a road!

Do not try this at home, folks.

The incident happened in the village of Naurangpur in Gurugram, Haryana. According to the police, this is what happened.

Workers and officials of GMDA (Gurugram Metropolitan Development Authority) were constructing a road in Sector 78.79. While this work was going on, a group of villagers arrived there. The villagers abused the workers and officials, beat them up, threatened them at gunpoint, and took the men and machines to another spot. There, in front of a petrol pump, they were asked to construct a road. The workers obeyed, and the road was constructed.

According to the police, the entire was orchestrated by the former chairman of a block samiti, one Hoshar Singh. The road was constructed in front of a petrol pump owned by Hoshiar Singh.

GMDA said that when the matter came to their notice, they acted quickly and a police complaint was filed against the thugs. Police acted quickly, and arrested 30 villagers. The case was registered at Kherki Daula police station for unlawful assembly, riots, assault or criminal force on public servants to prevent them from discharging their duty, obstructing public servants, causing hurt and criminal intimidation. That is a lot of sections! 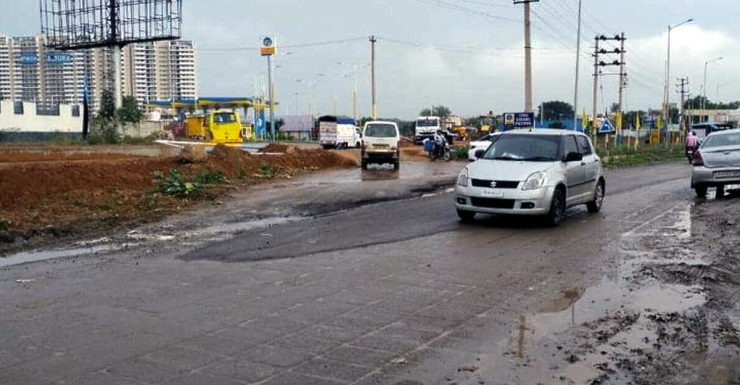 The owner of the petrol pump Hoshiar Singh refuted the police version. He said that the villagers acted on their own, as the section of the road there had see many accidents. He claimed that around 20 accidents happened on the pothole ridden road in just two months. Not just that, the road was waterlogged too according to him. “This is no crime to save the lives of our people. Many small children have also suffered injuries and the entire stretch is not my personal property, it is used by the villagers,” he said. That might well be the case, yes. But breaking the law can have consequences if and when the police gets into the act, and here they did.

Hoshiar Singh said that complaints about the stretch of road in Naurangpur were sent multiple times, but GMDA officials refused to act and that was the reason why the villagers took matters into their own hands. Rajendar Singh, station house officer at Kherki Daula police station said that it was Hoshiar Singh himself who held the staff members and workers at gunpoint.

GMDA officials meanwhile said that they never received any complaints about the potholed road.

There have been many instances across India over the years when regular people complained of bad roads and no action was taken, and finally they took matters into their own hands. But usually, their approach has been to build the roads or fix the roads on their own. Getting a road constructed at gunpoint, on the other hand, is an innovative approach by the villagers. We can only hope that the aam aadmi across India does not get inspired by this story, and decide to step out on the road with guns and lathis to deal with the issue in their own unique, muscular fasion!

Do not try this at home, folks. The incident happened in the village of Naurangpur in Gurugram, Haryana. According to the police, this is what happened. Also read: 10 DC Design cars & how they look in the REAL world: Maruti Swift to Mahindra XUV500 Workers and officials of GMDA (Gurugram Metropolitan Development Authority) were…