Couple of months ago, popular Punjabi singer, rapper, songwriter and Actor Sidhu Moosewala was murdered in broad daylight. The investigation related to the murder is currently going on the cops have even arrested gangsters in connection with the incident. Just like many other artists from Punjab, Sidhu also had soft corner for vehicles, especially SUVs. We have featured several videos of him getting his Fortuner modified on our website. Other than Fortuner, the singer also had many other SUVs in his garage. One such vehicle was his vintage Jeep. The Jeep was undergoing restoration when this unfortunate incident happened. The jeep has now been handed over to Sidhu Moosewala’s father and here is the video.

The video been uploaded by Dayakaran vlogs on their YouTube channel. In this video, the vlogger who was a friend of Sidhu Moosewala is seen talking in the video. The Jeep belonged to Sidhu’s father and it was in a very bad condition. The singer wanted to repaint the jeep and gave it to a workshop to specialises in restoring such vintage vehicles. The garage owner who worked on the car can be heard saying in the video that whoever worked on this particular Jeep did not do a good job. A part of the chassis had rusted away and the jeep also had several mechanical problems.

The garage owner even offered him another Jeep but, he wanted his own Jeep to be restored. In video, vlogger talks about all the work that was done on this SUV. This is a vintage 4×4 Jeep and as part of the restoration, they completely stripped the SUV down and build the same again. The basic looks of the SUV remains the same however the workshop added some handy features that won’t look too modern on the car. The bumper on this Jeep is made of meta and there are shackles painted in Red shade installed on them. An electric winch is also installed at the front. 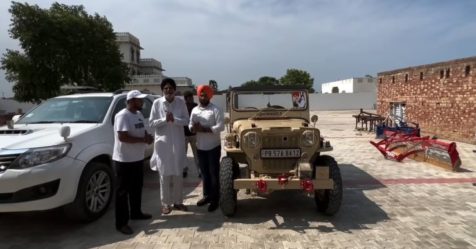 The headlamps are the same as stock and same is the case with the grille. The bonnet was completely rebuilt as the original unit was damaged. Under the bonnet, the engine was also restored so that it works without any problems. All the rust issues on the car were corrected and a coat of rubber coating was given to protect it from rust in the future. The whole jeep was painted in an army brown shade which was selected by the singer himself.

The canopy was redone and the lights, wheels were all restored. Vlogger mentions in the video that, Sidhu was so close to this particular vehicle that he used to video call the mechanic every evening to know the progress of the work. He also gave some suggestions as the work was progressing. The jeep now gets electric windshield wipers, antenna and the front seats can tumble down so that the rear seats can be accessed from the front. Video also shows the vlogger and the garage owner handing over the car to Sidhu Moosewala’s father at his residence.

Couple of months ago, popular Punjabi singer, rapper, songwriter and Actor Sidhu Moosewala was murdered in broad daylight. The investigation related to the murder is currently going on the cops have even arrested gangsters in connection with the incident. Just like many other artists from Punjab, Sidhu also had soft corner for vehicles, especially SUVs.…