Mahindra Thar is currently one of the most affordable and popular 4×4 SUVs in the market. Mahindra launched Thar back in 2020 and it received an overwhelming response from customers. The Thar became so popular that even today, the waiting period on the SUV is several months long. In comparison to the previous generation Thar, Mahindra has improved several things and they offer a lot more in terms of features too. There are several ownership videos of Mahindra Thar available online but here we have a video where the owner of the SUV is facing some issues with the vehicle.

The video has been uploaded by Arun Panwar on their YouTube channel. In this video, the vlogger talks about some of the issues that he has been facing in his Mahindra Thar. He first talks about the problem in the AC. The Air-conditioning system in his Mahindra Thar was not working properly. He was travelling with his friends in the car when his AC decided to give up. Vlogger noticed that the AC vents were pushing hot air instead of cold air.

Soon, the passengers sitting inside the car started sweating. They tried to adjust the AC switches but it was of no use. He mentions that no notification or any other lights blew when this issue happened. It became so hot inside the cabin that the vlogger had to drive the car with windows rolled down. Vlogger is from Northern part of India where it is extremely hot. After some time when the vlogger was returning to his home, he could be heard saying that the AC has started to work once again. 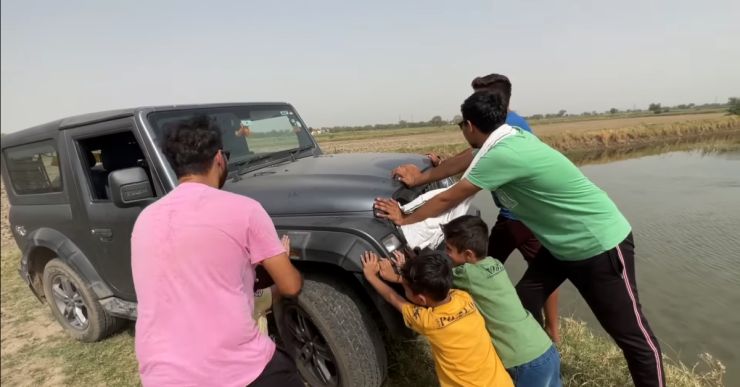 The problem now is that he has to drive the car at good speed so that the AC could work. The moment he takes his foot off the accelerator pedal, the flow of cold air stops. He also mentioned that the engine temperature gauge was showing that the temperature was rising. The next day, he took the car on a small road trip with his family. After reaching the destination, the Thar was showing that the engine temperature high. The notification light was glowing on the instrument cluster. Vlogger stopped the car and then pushed it to a parking spot where the car can cool down.

Once the engine had cooled down, the car started without any problem and the vlogger brought the SUV back. Vlogger mentions that he will be taking the SUV to a Mahindra authorised service centre to find out what exactly the issue is and resolve it. Recently  several Volkswagen Taigun owners have come forward saying that the AC in their car is not cooling down the cabin. Video of a 2 week old Volkswagen Taigun owner has shared a video on YouTube where he measures the temperature of the air that is being pushed out from the AC vents. The owner mentioned that the AC is working when he is driving on open roads and maintaining good speed but as soon as he slows down or stops, the AC stops working as well.

Mahindra Thar is currently one of the most affordable and popular 4×4 SUVs in the market. Mahindra launched Thar back in 2020 and it received an overwhelming response from customers. The Thar became so popular that even today, the waiting period on the SUV is several months long. In comparison to the previous generation Thar,…