Vlogger rides a scooter with a roof [Video]

The video is uploaded on YouTube by BikeWithGirl. In the video, we can see that it looks more like a smaller version of a car instead of a motorcycle with a roof. The name of the motorcycle is AD 200 and it is made by Adiva Advanced Vehicles.

This hybrid vehicle uses a 171 cc, single-cylinder engine that gets liquid-cooling. The engine is taken from Peugeot. It produces 15.8 hp of max power and 15.3 Nm of peak torque. In the video, we can see that the AD200 derives a lot of attention from pedestrians and fellow motorcyclists. The whole roof can fold into pieces and then can be stored in a storage box mounted behind the vehicle. Even after that, the storage box has a decent amount of space. If you are using the roof then the storage box can store at least 2 full size helmets. 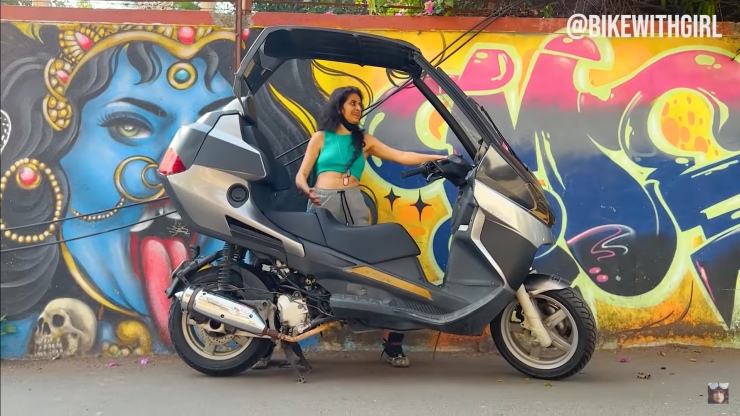 There is a windshield in the front with its own wiper and even washer. There is an analogue instrument cluster which has twin pods. On the left, there is a speedometer whereas on the right there is a fuel gauge and a temperature gauge. There is also a multi-information display between both gauges.

There is also a storage compartment just below the instrument cluster. The AD 200 even has two air vents to blow air on the rider. This probably has been done because the front windshield is so huge that it would block the natural airflow.

The host also sits on the pillion seat and says that it is very comfortable as it has a proper backrest, headrest and armrest. There are hazard light switch, cigarette lighter, speakers and a lot of cubby holes to store the stuff. The fuel tank has a capacity of 12 litres and it can be opened via the key. Because the scooter is so heavy it can be a bit difficult to remove it from the main stand. We can see the host struggling for a bit with this issue.

The scooter was manufactured in 2011 and the speedometer of the scooter is not working. The host says that she is enjoying the windshield because the dirt cannot directly hit the rider. Moreover, the roof is also protecting the rider from heat. The scooter weighs 184 kgs and because of all that bulk, it is a bit tough to take a U-turn in it.

One of the disadvantages that many people consider of buying a motorcycle is that the rider and the pillion are prone to the environment. So, they have to face the heat and rain. However, not everyone in India can afford a car and of which many people have to settle for a motorcycle. Well, here…