Hindustan Ambassadors is a car that holds a special place in the heart of an Indian car enthusiast. It was a popular car that has been on production for several decades. It was first ever car to be made in India and was popular among politicians and government. The production for Hindustan Ambassador stopped back in 2014 and even today there are several well-maintained examples of the same available in India. We have featured some of them on our website as well. Here we have a video where a vlogger shares his experience of buying a Mark 2 Hindustan Ambassador and his future plans with it.

The video has been uploaded by sudus custom on their YouTube channel. In this video vlogger and his friend travel all the way to Trivandrum to pick the car. The previous owner of the sedan who is friend of the vlogger had informed him about the car. Vlogger wanted to check the condition of the vehicle first and then decide whether he wants to buy it or not. It is a Mark 2 Hindustan Ambassador but the car was restored by the owner. Vlogger was fine with the condition and finalised the deal.

After buying the car, he starts driving the car back to his home which is close to 170 km or 4-5 hrs drive. In between, he stops to explain the condition of the car for video. Vlogger mentions that the owner of this sedan had done some restoration work in the past but he was not using the car for a very long time and because of which several panels on the car had started rusting. Many of the panels on the car were also replaced during the restoration process. 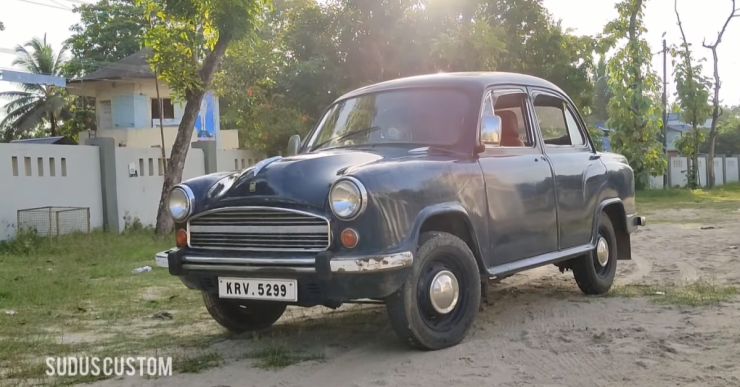 The car comes with a front grille which was from a later generation Ambassador. Vlogger mentions that sourcing the original Mark 2 type grille is quite hard and if he comes across one then he would definitely replace it. The chrome and nickel plated bumper had lost its shine and there were spots on it as well. The car headlamps and the chrome wheel caps are all stock units. One of the rear fender panels has completely rusted and portion is missing. The number plate and the bumper and tail gate also has rust issues.

The interior of the car was also restored. The original bench seats in the car were replaced with bucket seats with custom made seat covers. The rear seat also has leather upholstery which offers a comfortable seating position to the occupants. The dashboard is all original and most of the lights and gauges on it work. The steering wheel was replaced and it currently uses a steering wheel from a different model. The horn and light stalk were also repositioned.

Vlogger mentioned that the car initially came with a petrol engine but it was later replaced with a 1.5 litre diesel engine. The car is officially a diesel vehicle on paper. This is a 1962 model Hindustan Ambassador and for a car that is 60 years old, it looks in decent condition. Vlogger mentions that the car mechanically has no issues and he plans to restore the car completely in future.