Volkswagen Virtus is one of the latest entrant into the mid-size sedan segment. It is actually a replacement for Volkswagen Vento in the market and is second product under Volkswagen’s India 2.0 strategy. It is available with two turbo petrol engine options. There are several videos related to Volkswagen Virtus available online. If you are looking for performance, then the 1.5 TSI engine is the one to go for. Here we have a video where a Volkswagen Virtus GT competes with an old-generation Honda Civic iVTEC in a drag race.

The video has been uploaded by TORQUED on their YouTube channel in their YouTube channel. In this video, vlogger does a drag race in his Volkswagen Virtus 1.5 TSI with a old-generation Honda Civic. Both vehicles used here are in stock condition and both have an automatic transmission. The Honda Civic seen here gets a 1.8 litre naturally aspirated petrol engine that generates 130 bhp and 170 Nm of torque. It is mated to an automatic transmission. The Volkswagen Virtus on the other hand uses a 1.5 litre turbocharged petrol engine that generates 148 Bhp and 250 Nm of peak torque. It is available with a 7-speed DSG transmission.

The vlogger is driving the Virtus while his friend is in the Honda Civic. Vlogger mentions in the video that he is giving Honda Civic driver an advantage in the first round. He turned the AC and ventilated seat on and the traction control on the sedan was also on. The race started and the Honda Civic was slightly more aggressive off the start line. It immediately took the lead but only for few seconds. As soon as the Civic shifted to second gear, Volkswagen Virtus managed to overtake the Civic and after that the gap between both the cars kept on increasing. Volkswagen Virtus was announced as the winner of the round and at 130 kmph, the vlogger started applying brakes. It should be noted that the Virtus was being driven in the Drive mode and not the Sport mode. 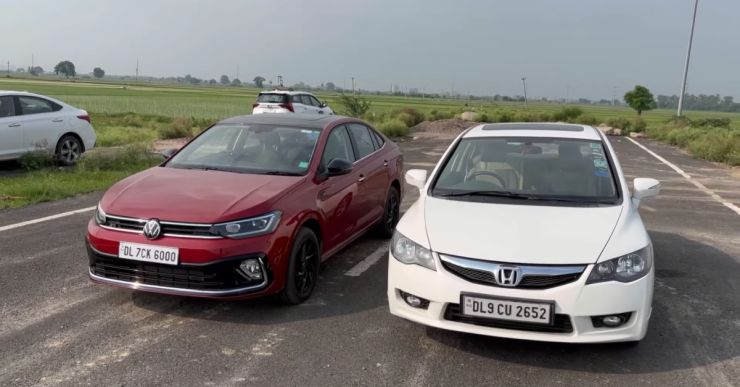 For the second round, vlogger’s friend who was with him in the Virtus came to the driver seat to see if the results remain same. Everything else about the car remains the same. The race started and Honda Civic took the lead. The new driver in Virtus was not aware about the initial lag in the DSG and was surprised to see Civic take the lead. Once the Virtus started picking up speed, the distance between both the vehicles started decreasing and Virtus soon took the lead back. Volkswagen Virtus won the second round without any issues.

For the last round, vlogger turned the AC and ventilated seats off and switched to Sport mode to see how exactly the car would perform. Just like the first and second round, Virtus won the third round as well. In comparison to the first two round, the time Virtus took to overtake Civic in the third round was very less. Virtus was performing slightly more aggressively than it did in regular mode. It was clear from the beginning that Virtus would win the race because it is a new vehicle and also generates a lot more power and torque. Age of the vehicle, transmission and also power to weight ratio plays a crucial role in such races.

Volkswagen Virtus is one of the latest entrant into the mid-size sedan segment. It is actually a replacement for Volkswagen Vento in the market and is second product under Volkswagen’s India 2.0 strategy. It is available with two turbo petrol engine options. There are several videos related to Volkswagen Virtus available online. If you are…