Volkswagen launched their mid-size sedan Virtus in the market earlier this year. It is one of the most powerful sedans in the segment. Virtus competes with cars like Maruti Ciaz, Honda City, Hyundai Verna, Skoda Slavia in the segment. Volkswagen Virtus is second product from the manufacturer under its India 2.0 strategy. It replaced Vento in Volkswagen’s portfolio. There are aftermarket accessories available for Virtus and modified examples of Virtus have been spotted in various parts of the country. Here we have a Volkswagen Virtus which comes with 18 inch alloy wheels.

The video of this modified Volkswagen Virtus has been shared by ravityres_amritsar on their Instagram profile. This is probably the first Volkswagen Virtus in India to get an 18 inch alloy wheel. Volkswagen Virtus comes with a 16 inch unit from the factory. The newly installed 18 inch alloy wheels on the white sedan completely changes the overall look of the car. The alloy wheels get a dual-tone finish and that helps change the look of the car completely. The wheels are wider than the stock units and the new set of wheels fill the wheel well area in a better manner. The handling and ride comfort of the car would have got affected due to this modification.

Other than the alloy wheels, no other major modifications are visible on the car. The Volkswagen Virtus sedan is a premium mid-size sedan which offers decent amount of features with it. Volkswagen Virtus comes with features like dual-tone leather seat covers, front ventilated seats, multi-function steering wheel, cruise control, fully digital instrument cluster or virtual cockpit, electric sunroof, automatic climate control, touchscreen infotainment system, rear AC vents and so on. The car offers a premium cabin and the exterior of the car looks good too. 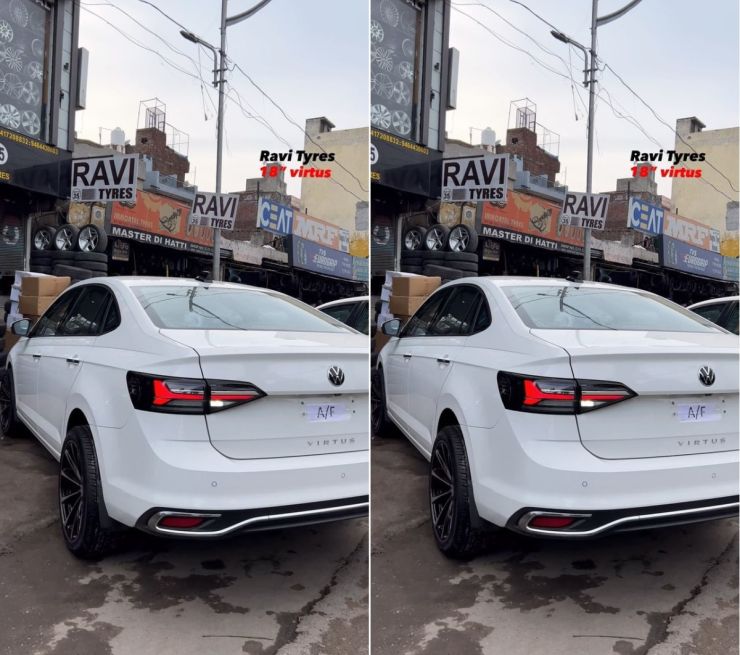 Volkswagen Virtus is built of MQB Ao IN platform. This is not the first product to use this platform. Skoda Slavia, Kushaq and Volkswagen Taigun are all based on the same platform. Volkswagen Virtus is available with two engine options. There is a 1.0 litre, three cylinder, turbocharged petrol engine and a 1.5 litre turbocharged petrol engine. The 1.5 litre turbo petrol version is called the GT. It is not clear whether the Virtus seen here in the video is GT or not. The 1.0 litre TSI version of the sedan produces 115 Ps and 178 Nm of peak torque. This engine is available with both manual and a 6-speed automatic transmission. The 1.5 litre turbo petrol engine of the Virtus generates 150 Ps and 250 Nm of peak torque. It is available with a DSG transmission as standard.

Volkswagen Virtus like many other cars from the brand is a well built or sturdy product. Recently, video of a Volkswagen Virtus accident was reported. It was probably the first crash of this premium sedan. It was the 1.0 TSI Topline automatic variant and the car got badly damaged in a frontal collision. The front-end of the car absorbed the impact of the collision quite well. On the inside, both the airbags got deployed and there were damaged parts inside too. The occupants are most likely to have escaped with minor injuries.

Volkswagen launched their mid-size sedan Virtus in the market earlier this year. It is one of the most powerful sedans in the segment. Virtus competes with cars like Maruti Ciaz, Honda City, Hyundai Verna, Skoda Slavia in the segment. Volkswagen Virtus is second product from the manufacturer under its India 2.0 strategy. It replaced Vento…